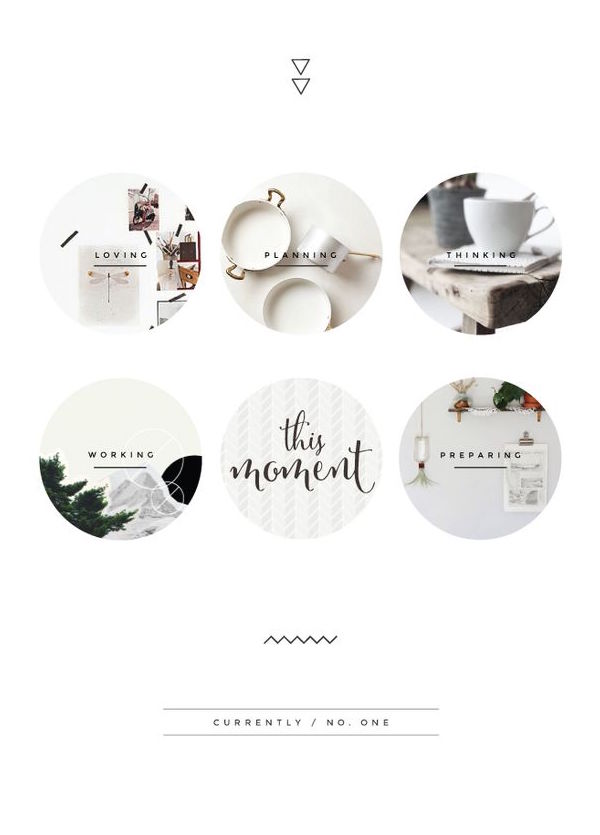 Here are a few things you can do

Go to toad and log on as system administrator. You could also do this sql developer.

Now you would have an overview of the sessions that might involve in locking the tables you would like to drop. So you could simply identify the sessions and kill the corresponding sessions where table locks are withheld. 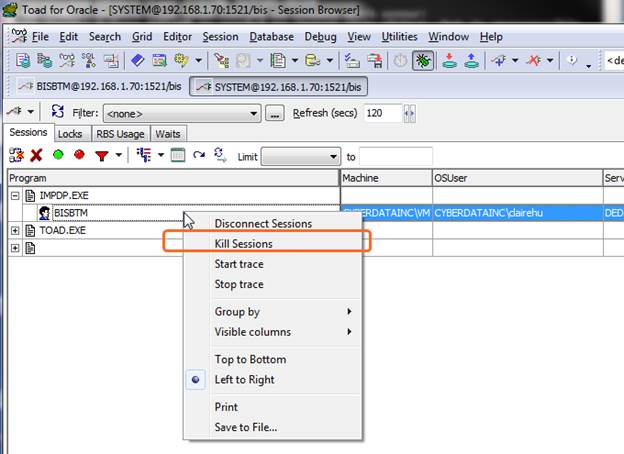 However sometimes, even we kill the existing sessions, the error would still not go away. I run my drop table script in toad that you could get the details of which table is being locked and the type of the lock. And then go to locks tab to identify the Sid number. You would see a similar window as below.

For example, on the above screen, my PEGASYS_OBLIGATI table is locked with Lock Type DML. It is because I was doing the data refresh and then it was interrupted in the middle. But Sid 24 didn’t show in any of the sessions in the session window. I could not kill the session to get rid of the locks. Instead I run the following sql statement to find the serial number in order to kill the dead session that holds the lock for my table of object.

After running the sql statement, I find the serial number with the corresponding  sid.

Now we are all set. Lock is released and drop could be proceeding.

If you want  to know more about v$session, check the link below:

Today, I would be talking about exporting a table to csv file. This method is especially useful for advanced data manipulation within the csv file and I would also talk about how to import the csv data back into the database as a table. I will be showing Java code snippet to explain importing the csv data and the tradeoff for using sql developer. My environment is based on oracle database and so that all the utility I would be using here is targeting oracle database.

Export a table to csv file:

Method 1. Use oracle sql developer. Please take a look at the video below:

Note: This is good for small table with not much data. However, if you are dealing with a large table, I would recommend you try method 2.

Method 2. Generate the csv file from command line. Here is a sample sql file I used to generate the  csv file.

Note: You could notice that the highlighted select statement has a last column called: DEL_COL.This column is used to fill in the space after the column separator coma.Otherwise the csv file generated from the command line would have a huge last column filled with spaces.You might need to manually delete the column if you would use oracle sql developer to import the csv file back into database later on.

There are two approaches to back up a table:

1: Back up a table under the exsiting schema by creating a new table with tablename_bck nameing convention.

Simply run the following query under the current schema :

2: Export the table to a dump file.

3: Import the dump file into database.

I would also like to note about the old utility tool exp and imp.

The syntax is slightly different. Without creating a reusable directory, in exp and imp, you have to specify explicitly of the directory where your dump file is saved to.

The above problem happened whenever you try to use the Import Data Pump client (impdp) to import a dumpfile that was created with the original Export client (exp).

Type in the following command:

The backup dump file will be found in the directory you specified.

For example: the following command is to export sample data from SAMPLE database:

Execute the following commands to create a database directory. This directory must point to a valid directory on the same server as the database: 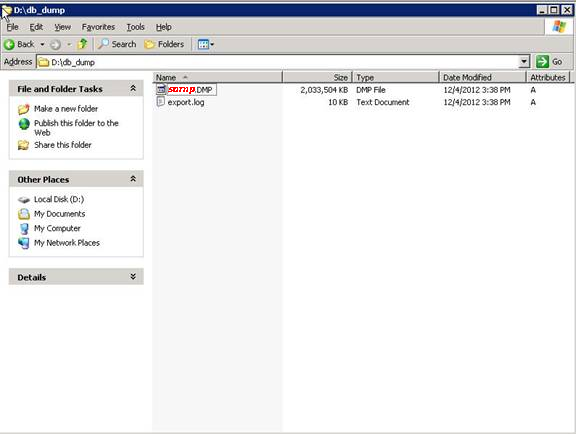 The backup dump file will be found in the directory you specified.

why we need to analyze tables, indexes, clusters:

Sometimes we have changes for the tables, for example if we have regular ETL process that constantly modifies the database structure or table contents. The statistics that Oracle collects from the last table analyzation might be out of sync with the current data dictionary. And this information is often used by the optimizer when querying. Therefore querys base against the old statistics would run slow and the database performance could be decreased because of the changed statistic not being collected accordingly.

What statistics does Oracle collect by the analyzation?

When using Oracle ANALYZE TABLE all domain indexes marked LOADING or FAILED will be skipped.

Note:Before analyzing a table with the Oracle ANALYZE TABLE command you must create function based indexes on the table.

Login Toad with your database connection. Select the table you want to analyze and right click on Analyze Table.

Once you get to the analyzation page, select the tables you want to do analyzation on and click on the green arrow to start analyzing the table.By default the method would be estimate statistics as shown in the picture below. 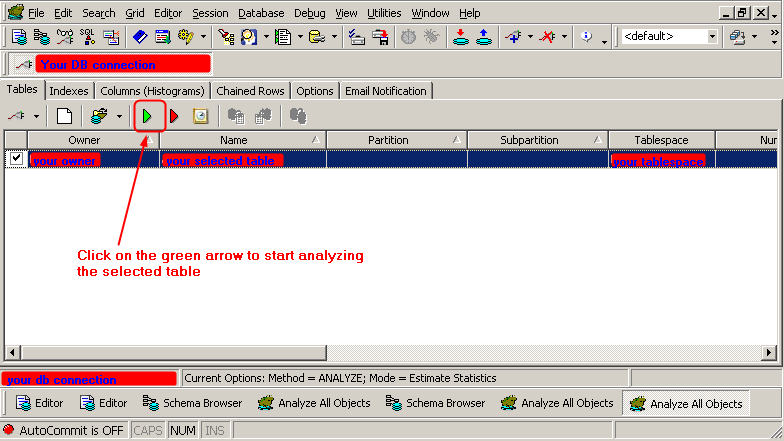 The success information is displayed after the analyzation. 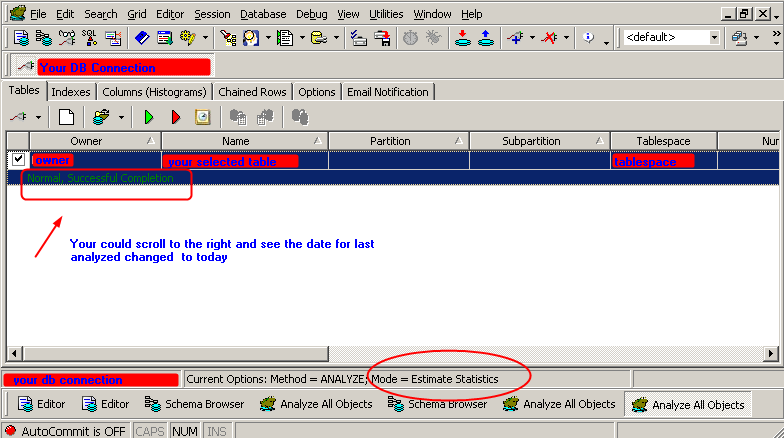 You could also change the mode to be compute statistics by switching to the Options tab and modify the Analyze Functions as shown below: 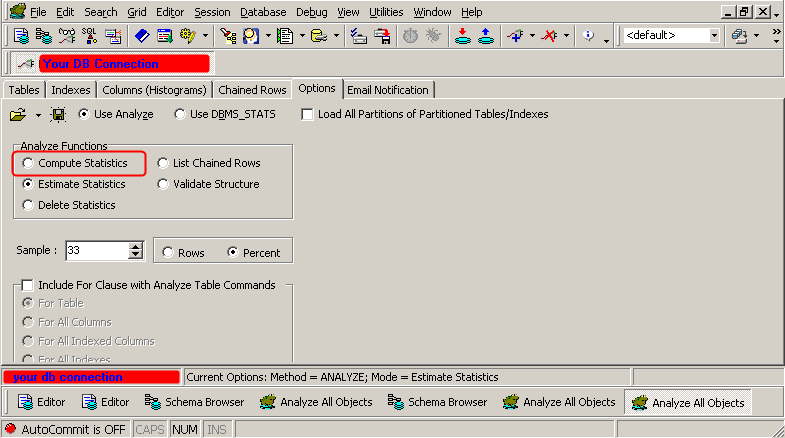 Login to SQLPLUS with your database connection as below:

For a more detailed information on the features that Oracle 11g Database has offered. Please take a look at the guru’s blog as below:

what would Oracle Database do behind the scenes for dropping table commands?

Basically, if there are no keywords specified as the first command shows, Oracle Database would perform the following operations:

The first question is

Why am I getting the error: ORA-02449: unique/primary keys in table referenced by foreign keys

The solution and workaround for the error when you want to drop tables referenced by child tables, is to use the CASCADE CONSTRAINTS option in the DROP TABLE statement.

That is why we use: 2. drop table table_name cascade constraints;

Now the question is

What if I accidentally delete the table and want to recover it back?

Here comes the keyword PURGE that differentiates a normal dropping command and a purged one. See the table below for comparisons between the two statements.

Unless you specify the PURGE clause, the DROP TABLE statement does not result in space being released back to the tablespace for use by other objects, and the space continues to count toward the user’s space quota. Additionally, the first command only results in the to-be-dropped table and its dependent objects being placed into the recycle bin. Specify PURGE if you want to drop the table and release the space associated with it in a single step.

Note: You cannot roll back a DROP TABLE statement with the PURGE keyword clause, nor you can recover the table if you have dropped it with PURGE clause. So be cautious and intentionally.

how could we recover the tables in the recycle bin?

One feature of Oracle 10g is recyclebin, which allows you to recover dropped tables.With recyclebin, any tables you drop do not actually get deleted. Instead, Oracle renames the table and its associated objects to a system-generated name that begins with BIN$.

Look at the following example to get a better understanding:

Let us first create a testing table called studentinfo that contains one row as below.

Now we want to drop this table and look into recycle bin to find it.

You could see the object name is changed because of the dropping action.

You could still query it as you would do before with this new object name. Because the table data is still there and if you want to undo the drop action, you could use the FLASHBACK command like below: 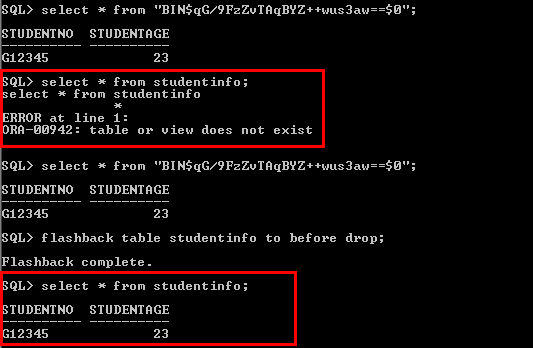 The next time when we drop the same table, oracle database would associate a new object name for the table. So you would understand that after a table is dropped, it is just renamed. It is still part of your tablespace, and this space counts against your user tablespace quota.This space would not release until you purge the table out of the recycbin. 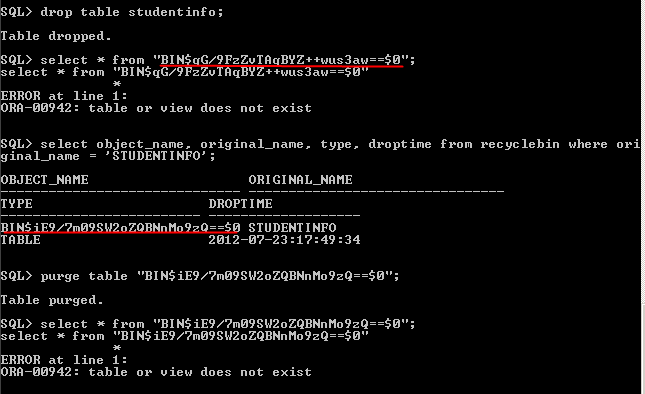 So now goes my last question:

Will the dropped tables stay in the recycle bin forever if there is no action made toward it later on?

The answer is NO. When your tablespace runs out of space or until you reach your user quota on the tablesapce. At that point, Oracle database would purge the objects at one time, starting with the ones dropped the longest time ago, until there is enough space for the current operation.

I was encountering an OPatch failure during my Oracle Application Server 10g upgrade. The reason is that our previous developers failed during the last patch installation. The failure message is displayed below:

Interim Patch is holding the lock from xxxxxxx

It looked like during the last unsuccessful patch installation. Patch number xxxxxxx acquired the patch lock but not released it. When the new patch was trying to aquire the same lock. It would be on hold. This information is generated during the last patch run and stored in the patch_locked file under the directory:

Delete this file and then reinstall the patch. You would be good to go!

Sometimes when you applied the patches, there would be some incompatiabity that would arise in the system. This new upgrade needs to be rolled back to keep the original environment.

Here are two useful commands for checking the version and the list of pathes that are touched.

Suppose my OAS Home is under /oracle/app/10gR3mid 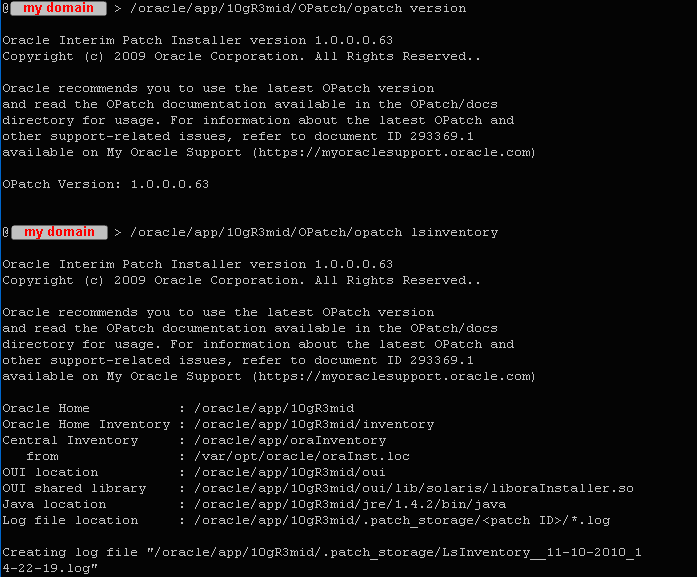 Suppose you put your opatch folder temporarily under /tmp and under the tmp folder there is patch folder : 10031961 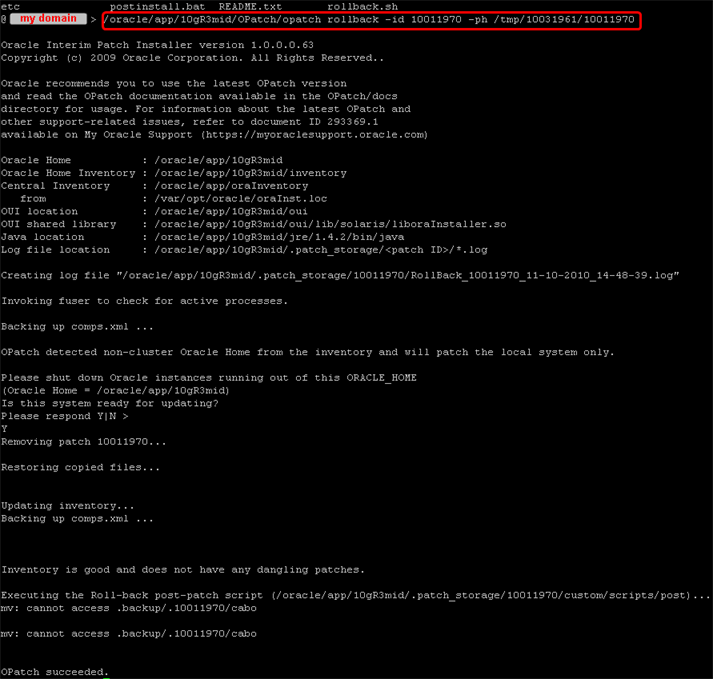 Before we apply the patch rollback, you could see the patch number exsits in the red box. 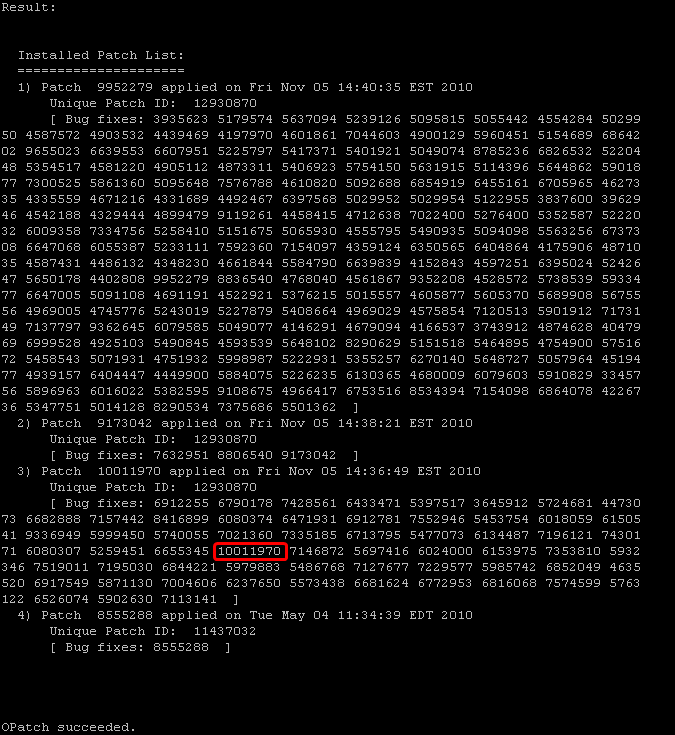 After we apply the rollback it is gone. 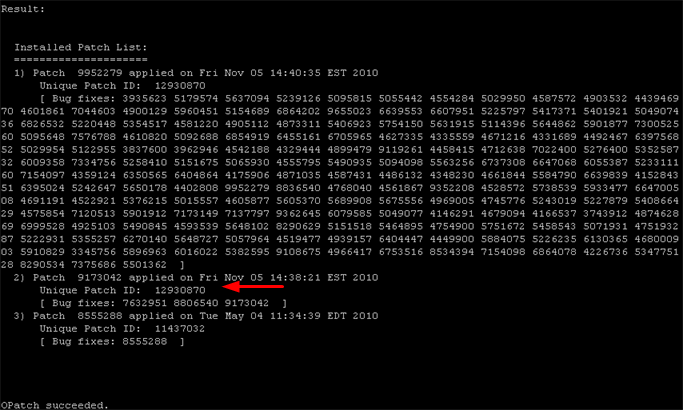 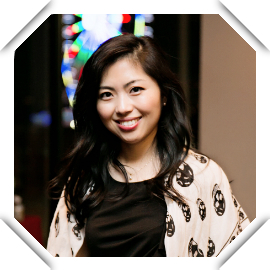